Aaron Rodgers is a Moron 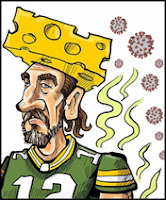 I suppose it was inevitable, that any population within the United States today is going to reflect the attitudes of the population at large. As a result, there are bound to be morons in the NFL just as there are morons in the U.S. as a whole. And as if they needed any more evidence, the message to the anti-vax crowd should be obvious: if you don’t wear a mask and you don’t get vaccinated, you’re going to get Covid. Period. Not that I care a whit about their health or their moronic decisions. I don’t. I have absolutely no sympathy for those who flout the science and then catch the Coronavirus and die, because they did it to themselves. What angers me is that their moronic decisions put other people’s lives at risk. That, I do care about. But Aaron Rodgers is a special case. Whether on purpose or not, at least Kyrie Irving of the Nets had the self-respect, as well as respect for others, to announce his idiocy to the world and let others know that if they played basketball with him they were putting themselves at risk. And so the Nets organization did the responsible thing—even if it was mandated by the laws of New York—and told Irving that until he decided to get vaccinated he wouldn’t be playing. That places the ball, so to speak, firmly in his court. And yet, whether or not Irving is still just as moronic, things played out quite differently with Rodgers.

Instead of being honest, the Packers quarterback made the calculated decision last summer to lie to the public—and, one assumes, the other players in the locker room—by making the claim that he was vaccinated when he wasn’t. Oh, sure, he didn’t use the word “vaccinated,” but that’s precisely what makes his lie so obvious. No one who watches that press conference can come away with any other conclusion. When asked if he was “vaccinated” Rodgers slipped in the word “immunized” and then continued on with the rest of the briefing as if he had used the word “vaccinated.” It was calculated deception and it worked. That is, it worked until he contracted Covid. As of course he was always going to, because the moron is unvaccinated! It doesn’t matter how much horse de-wormer or anti-malaria medication a person ingests, it’s not going to keep them from getting the Coronavirus any more than injecting themselves with bleach. Polio and small pox have been irradicated in the U.S. because of vaccines. And yet, unfortunately, measles and whooping cough are still with us because of anti-vaccination imbeciles like Rodgers. If proving to the world how stupid he is is more important to Kyrie Irving than playing basketball, then so be it. But the same should be true in the NFL, regardless of the city that the team is in. If players like Rodgers don’t want to be vaccinated, then so be it. But they should also have to sit their ass on the couch on Sundays just like the rest of us.

Anti-vaxers are always on about “personal choice” and “personal freedom.” But the point that has been made continuously since the pandemic began is that a person’s individual freedom ends at the point that it puts others at risk. The boneheaded anti-intellectualism of people like Rodgers has never been clearer than it has been during the pandemic. While they cry and whine and complain about the imposition on their freedoms of having to be vaccinated and wear masks in public, they seem absolutely clueless about their imposition on the freedom of others not to be put at risk by their foolish decision to ignore the science. Of course, the Packers organization is as much to blame as Rodgers—their only concern, just as with State Farm, is money—but that’s another subject for another time. Arron Rodgers purposefully lied about his vaccination status, and put not only his teammates—who quite possibly may have known—but the rest of the players and staffs he played against, as well as fans who attended the games, none of whom could possibly have known, at risk because he is too stupid to understand that people have an obligation in a free society to consider the results their actions have on others before they act. Rodgers knew exactly what he was doing, and should be made to pay the price by being barred from the workplace, and the salary that goes along with it, until he has been vaccinated, just like Kyrie Irving . . . and just like the rest of us.